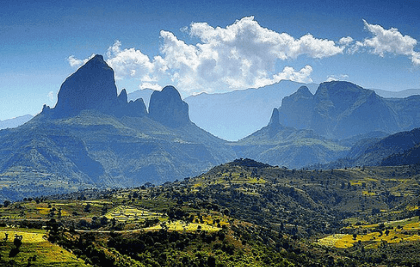 Gentle highland ridges at altitudes above 3600 metres, covered with grasses, isolated trees (Erica Arborea) and the bizarre Giant Lobelia (Lobelia rhynchopetalum) are found on the high plateau that ends abruptly at 1000- to 2000-m deep escarpments.

The margins of this high plateau consist of precipitous cliffs and deep, canyon-style gorges. In some places, the escarpment forms small elevations that offer splendid natal lookout points. The spectacular views from the observation points at Gidir Got and lmet Gogo in the centre of the Simien Mountains National Park offer unparalleled panoramas along the high plateau and down to the lowland areas. Given the right meteorological conditions. views reaching up to a hundred kilometres over the valleys and the terraces of the Tekeze lowland basin are no exception.

Geologically speaking, the entire highlands of the Simen mountains consist of dark Trapp basalts and bright, soft tuff. They alternate and constitute a massive complex that is more than 3000 m thick. This complex was formed by volcanic eruptions in the Tertiary Oligocene-Miocene Age some 20-30 million years ago; ever since it has been going through processes of uplifting and erosion.

The main attraction of the Simen Mountains National Park is its biosphere: the steep cliffs and the cool climate at the altitude of the Erica tree line (3600 to 4000 masl) have created conditions that are appropriate for the survival of an ibex species (Capra Walie) endemic to the Simen Mountains.

Despite the severe restriction of their habitat over the last centuries, several hundred animals have survived up to the present. Apart from the Walia ibex, many other animal species are found in the Park, el. the endemic Simen fox or Ethiopian wolf (Canis Simiensis), several birds of prey. the endemic Gelada baboon (Th’eropithecusgelada), the Klipspringer (Oreotragus omotragus), and the bushbuck (liagelphus scriptus).

The rareness of these species formed the backbone of the concept for conservation of the area, which led to the establishment of the Simen Mountains National Park in 1969, and its listing as a World Heritage Site in 1978.

The human population living in the area adds to the distinctiveness of this special natural environment. The traditional lifestyle of the rural population and their survival in a rather harsh climate and with scarce natural resources make for the most striking impressions a visitor will have when trekking in the Park and its surrounding rural area.